Should My Financial Institution Enter into This Interest Rate Swap?

A rather common method for financial institutions to hedge earnings or value at risk is an interest rate swap transaction. As we move into ever-changing rate environments, eventually you or someone on your ALCO committee may wonder exactly what an interest rate swap would do for the institution. A good interest rate risk model should have the capability to do this type of what-if modeling so that you and the committee have the information needed to make the best decision.

The following is an example of an analysis of an interest rate swap transaction to see what the results would be for a fictitious institution IF it entered into the transaction. Note that this analysis doesn’t include the cost to the broker or any other operational costs to enter into the transaction. The example may be rudimentary to some professionals. However, walking through this type of analysis can be thought provoking to some and can make others aware that this type of modeling can be done in an asset/liability model.

Does Sample Bank need to hedge this commercial loan with an interest rate swap?

Sample Bank ($400 million in assets) has a successful commercial lender that recently was asked to quote a client on a $4 million commercial real estate loan. The loan pricing committee met and decided that they would quote the client 120-month balloon, 240 amortizing at 4.58% fixed. But how would this affect the position of the bank when related to their interest rate risk (IRR)? In other words, would adding this longer term, fixed-rate loan damage the bank’s IRR position? Would an interest rate swap hedge any perceived risk, or would entering into a swap not make sense for the institution at this time?

Sample Bank decided to get a quote on an interest rate swap to hedge this loan. On a notional amount of $4MM with 240 amortization, Sample Bank would pay 4.58% fixed and receive 1 Mo Libor + 200 bps floating. In our hypothetical example, at first glance, from an earnings perspective, this transaction is underwater when compared to the current rate environment (1 Mo Libor + 200 bps is currently 2.15%). However, if and when rates rise, the interest received increases. How quickly and when rates rise will determine if this transaction is “profitable” or reduces the bank’s IRR. Sample Bank decided to run two scenarios from their model: 1) Book the loan with no swap 2) Book the loan with the swap. The following is the analysis after running the what-if in the model:

First, Sample Bank was able to isolate the earnings produced by the swap transaction over a 12-month period in various rate environments. The interest rate swap didn’t produce a positive income stream until the +300 rate shock environment. However, we know that when rates increase more than 243 bps this transaction will be “profitable”. In the first 12 months or so, rates don’t even rise enough in our hypothetical rate forecast to produce a positive effect. When looking at a side-by-side comparison, it’s easy to see that the WITH swap transaction doesn’t produce more net income until the +300 rate environment. From a short-term earnings perspective, then, it’s highly unlikely that this swap transaction would be of any use to the institution.

From a value at risk perspective, the scenario that includes the swap transaction does in fact improve the equity position. The fixed interest paid vs. floating interest received cash flow streams -- valued over the long term -- produce a positive effect on the portfolio equity ratio. We can see when comparing the market value results with NO swap and WITH the swap, the portfolio equity ratios are higher in the WITH swap scenario. Both scenarios were run in each of the model rate forecasts for 12 months, then rate shocks were applied. Each simulation produced higher equity positions WITH the swap, however only slightly. Since Sample Bank has 14%+ portfolio equity ratios without the swap, they can probably feel safe taking on the little additional long-term IRR of the new $4MM commercial real estate loan. Keep in mind, though, if Sample Bank’s value at risk profile was different (e.g., lower equity), this might make more sense. That is, if they were willing and able to take the initial hit to short-term earnings, the interest rate swap might make sense for the institution. 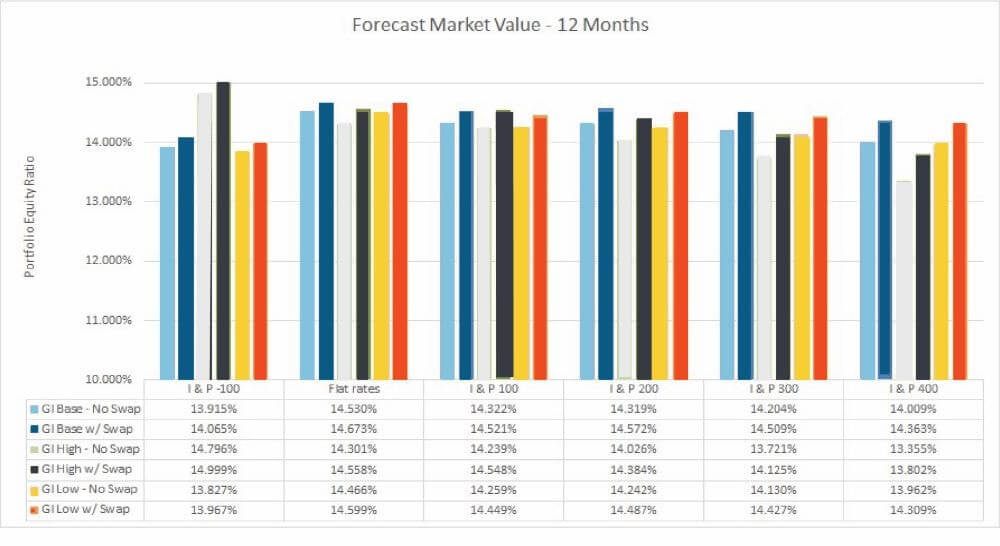 Teri spent 16 years at CUNA Mutual Group in various management roles, including Financial Analyst, Consulting Manager, and Product Specialist. She also worked for many years in community financial institutions serving as a Controller and Financial Analyst responsible for asset/liability reporting to management teams and boards of directors.

Teri is a licensed CPA and an active member in the American Institute of CPAs (AICPA) and the Wisconsin Institute of Certified Public Accountants (WICPA). She has a Bachelor of Science in accounting from Upper Iowa University.

Utilize our experts to get the support you need.
Speak with an advisor