Community bankers are largely positive about the future, based on the first results of a new index gauging business sentiment among the financial professionals who serve a critical role in local economies.

More than two-thirds of community banks surveyed for the Conference of State Bank Supervisors (CSBS) Community Bank Sentiment Index indicated they expect business conditions will be the same or better in the next 12 months.

“Given the overall positive state of the economy, this is pretty remarkable,” Michael L. Stevens, CSBS Senior Executive Vice President, said in the conference’s newsletter announcing the results. “As you would expect, a positive economic environment has a direct correlation to the bottom line, with 80% of banks expecting the same or better profits and 60% believing they will see an increase in franchise value.”

Overall, the current average value of the Community Bank Sentiment Index is 122, indicating more positive than negative responses to seven mostly forward-looking questions that bankers will be asked each quarter to construct the index. An index of 100 would mean bankers’ outlook is neutral and anything below 100 would indicate a negative outlook.

“Banks are central to the effective performance of the business sector,” said Temple University economists William C. Dunkelberg and Jonathan A. Scott, who worked with CSBS to create the index, in a paper summarizing the first results of the index. Dunkleberg is the former dean of Temple’s School of Business and Management and has served as the Chief Economist for the National Federation of Independent Business since 1971.

“Bankers’ attitudes reflect conditions in capital markets and conditions in the economy, primarily the local economy served by each bank,” Dunkelberg and Scott wrote. “These insights have the potential to inform the market and policy makers on the overall health of the economy, opportunities, and risk.” Bankers were asked the following questions so that the index could be constructed:

Shifts in the index will reflect shifts in expectations over time as the economic and regulatory outlook changes over time. The survey for the inaugural index included 512 FDIC banks responding from early in the second quarter through July 5.

Dunkelberg, who more than 45 years ago began a regular survey of small businesses for the National Federation of Independent Business to learn more about their expectations, said in an interview that the CSBS Community Bank Sentiment Index has the potential to provide valuable information – not only to the banks themselves but also to the broader market.

“If you watch CNBC, all you hear about is 10 big banks, but there are 5,000 small banks doing an incredibly important job in the economy and nobody knows anything about them, so let’s start finding out about them,” he said.

Despite the overall positive sentiment, a closer look at the index components showed some concern among bankers. For example, 13% of the bankers answered that they expected business conditions to be “better than today” in 12 months, but 27% expected them to be “worse than today.” Fifty-seven percent expected business conditions to be the same. The fact that a higher percentage expected worse conditions was consistent with bankers’ response to expectations about Federal Reserve policies: 32% said they expected monetary policy to be looser while only 15% expected policy to tighten. 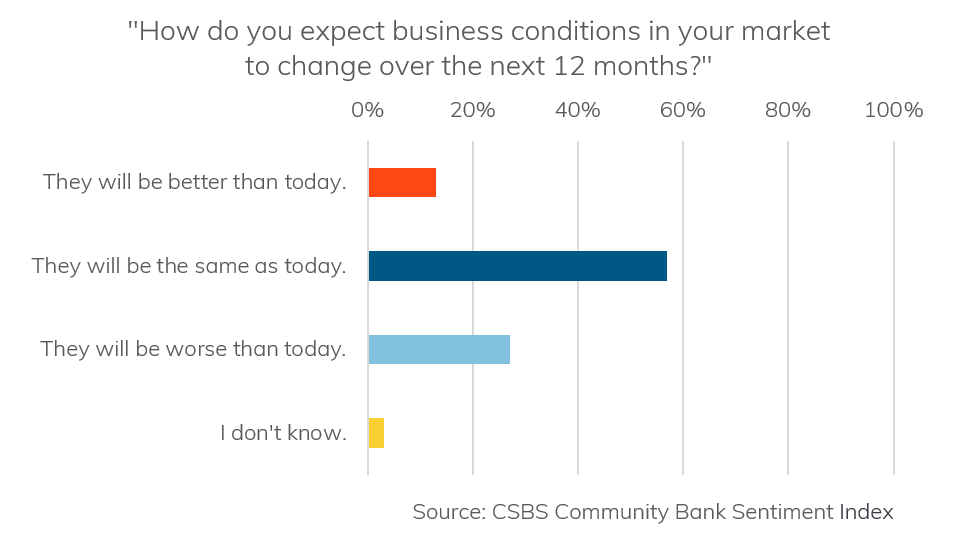 Among other findings from the Community Bank Sentiment Index survey:

CSBS has also issued the third-quarter survey to bankers and expects to release the index findings at the Community Bank Research and Policy Conference, which it co-hosts with the FDIC and the Federal Reserve, on Oct. 1. Is Your Credit Union Losing Ground with Members? Here’s How to Gain it Back

Mary Ellen Biery is a Senior Writer and Content Specialist at Abrigo.