The Future of Noninterest Income at Financial Institutions

Noninterest income has been trending lower in recent years, but service charges and fees make up a larger share.

Regulatory and competitive pressure to reevaluate fees may result in further reductions in noninterest income as a percentage of revenue.

Community banks have seen less volatility in noninterest income, and many are still eyeing growth across the category.

Types of Noninterest Income
An important source of revenue

Financial institutions generate most of their income by lending and investment activities. However, a portion of revenue comes from noninterest income. Noninterest income includes income from such items as overdraft fees, service charges, loan origination fees, and ATM fees. The percentage of institutions’ revenue from this source of income has changed over time, and the composition has also transitioned.

This article looks at trends in growth and composition as well as legal, regulatory, and competitive pressure on noninterest earnings.

Where does noninterest income come from? Noninterest income can be broken down into service charges (and fee income) on deposit accounts, trading revenue, investment banking activities, and the catch-all, other.

Specific examples of the four types of noninterest income include:

It might seem as if all financial institutions would look to noninterest income to make up the difference in what is lacking in interest income as we experience historically low interest rates, but the opposite is true – at least among large banks. A closer look at the decrease in overall noninterest income reveals an interesting phenomenon – a change in the composition of noninterest income. Noninterest income associated with the housing markets such as securitization, trading, and real estate slowed significantly during the financial crisis and beyond. At the same time, income from investment banking (fiduciary activities) has increased as financial institutions attempt to make up for what is lacking in interest income.

Service charges have also grown significantly, and again, banks are relying heavily on these charges to assist in making up the difference from low margins in this historically low-rate environment. Currently, banks are flush with “surge” deposits, which could be contributing to this additional source of income. Flush with deposits? See this decision guide for uses of excess liquidity.

Lawmakers and the regulatory community have taken notice of the increase in bank service charges and fee income and have responded, specifically regarding overdraft fees. Many institutions offer to pay items presented on an account without the necessary balance to cover the item as a convenience, an on-the-spot credit advance as needed for a nonsufficient funds (NSF) fee. It is relatively easy to find critics of “overdraft fees” charged by financial institutions. Commonly judged by those outside of the financial industry to be excessively punitive and even predatory, institutions have long been accused of punishing low-income customers, especially during the recent pandemic.

The Consumer Financial Protection Bureau (CFPB) in 2020 ordered TD Bank, N.A. to pay $122 million in and civil penalties and restitution to more than 1.4 million customers over "deceptive" overdraft enrollment practices between 2014 and 2018, Banking Dive noted in a recent article about growth in overdraft fees.  Additionally, Representative Carolyn Maloney, D-NY, has joined consumer advocates and to back the Overdraft Protection Act. This bill is aimed at, among other things:

Finally, banking alternatives such as Chime-Spot Me, an app offering to cover debit card purchases and cash advances that overdraw the account from $20 to $200 without an overdraft fee, have become more competitive.

As choices increase, consumer expectations are changing, and large financial institutions are reacting to the regulatory, legal, and competitive pressure by creating new options for customers to avoid overdraft fees. To remain competitive, some of the nations’ largest banks have introduced new products. Examples include PNC's Low Cash Mode, which gives customers a 24-hour grace period to avoid overdraft fees. Capital One and Fifth Third Bank have launched programs to give customers early access to direct deposits, up to two days. Ally Bank has not only eliminated overdraft fees, but refunded overdraft fees between March and June 2020 as a goodwill gesture to customers challenged by the pandemic.

In contrast with the nation’s largest financial institutions, community banks have historically fallen short in their ability to generate noninterest income, primarily because of larger financial institutions’ involvement with investment activities that typically weren’t part of community banks’ business models. A recent study by the Cleveland Fed noted that traditionally, noninterest income is only 30% to 40% of small banks’ operating revenue, compared with over half of large banks’ revenue. 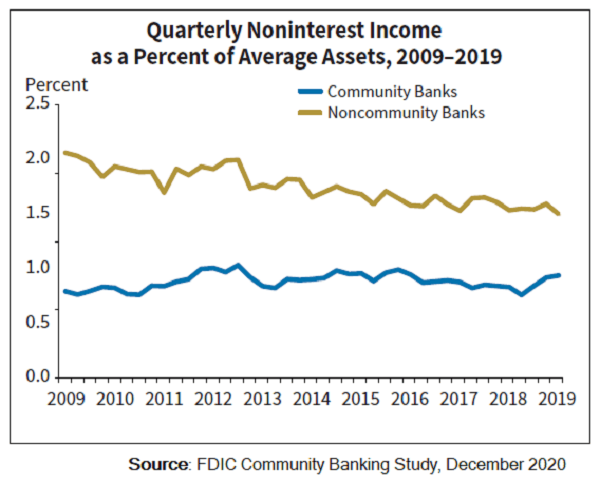 And it appears that community banks’ strategy for noninterest income is on a quite different path as well from larger institutions.

The Conference of State Bank Supervisors' (CSBS) 2021 National Survey of Community Banks of nearly 500 bankers found that bankers anticipate expanding all sources of noninterest revenue. Some respondents indicated this may come in the form of higher fees and purchases of loans originated on a fintech platform. Others are looking in multiple areas for growth opportunities.

“We are also looking at different lines of business that may be able to bring more noninterest income to the bottom line,” said one community banker in the survey.

What's next for noninterest income?

Historically low interest rates have negatively pressured margins and impact all revenue at financial institutions. Reductions in noninterest income as a percentage of revenue have not helped profitability, either. And current regulatory, legal, and competitive pressure to reinvent how customers’ bank puts further pressure on future earnings.

We can help you make better strategic decisions with dynamic ALM modeling. Abrigo software, paired with partnership-focused implementation and our respected advisory services professionals, ensures that you get the support you need for emergencies or regular maintenance to optimize your decisions. Talk to a specialist to learn more.

4 Steps for Integrating CECL and Other Risk Management Models Susan Sharbel brings over 35 years of expertise in the banking industry, with a focus on asset/liability management and regulatory compliance. Prior to joining Abrigo, she was an ALM consultant leading ALM model implementations and managing the quarterly ALM process, support, and analysis for nearly 40 banking clients. As a